In January of 2011, I embarked on my first cruise, and it ended up being quite the saga adventure.  I was terrified of the notion of being on a ship for seven days out on the sea, visiting new places, stomach viruses and seasickness a possible issue.  Visions of The Poseidon Adventure or Titanic . . .

capsized or sinking ships . . . don’t forget the ice burgs . . . danced through my head.  I am a worrier by nature and every big, bad, scary scenario came to mind.
Traveling day, Saturday, came and as we were driving to the port and I was “trying” to distract myself by reading, my mom teases me telling me some small boat off in the distance was the ship we would really be on.  A real comedian.  The process getting on the ship seemed never ending; checking in, getting the cards to use while on board that had our names printed on them, passport checks, security, having our i.d. picture taken.
Once on the ship we could finally go eat and look for our family friends, there would be about 31 in our group, that were joining us for the week.  We get to our room, and honestly, it much smaller than I had imagined.  Seven days in that room, it was going to be funnnnn.  Ship practices required a lesson on emergency procedures, at muster stations.  OH, yeah, life vests and life boats, really settled my nerves down.  Finally, we leave port and the ship has a sail away party; basically we sail out of port to music, dancing, and games on the lido deck.  Dinner every night is in a large dinning room, served by the same wait staff each night, where we were to remember to have “fun, fun, fun,” according to the maitre d’.   Sadly, we were seated near a loud group of people in the dinning room, who proceed to dance, clap, and be annoying every night!  Our planned ports of call were Cozumel, Belize, Isla Roatan, and Costa Maya.
We spent Sunday at sea, it was pretty uneventful.  All you could really do was spend time exploring the ship, seeing the sites, catching sun, kind of a captive audience.  Fortunately, planning ahead with seasick patches I  decided to wear from the beginning, I didn’t get seasickness.  That night we checked out the nightlife, and I was tempted by karaoke, but there wasn’t an available slot for me to sing that night, which I honestly wasn’t brave enough for yet.
Monday in Cozumel was lovely weather.  We hung out at the port area, browsed the shopping, had some fun at Fat Tuesdays.  Yard long drinks, music, and Mexico.  I got a pink cowgirl hat, quite a pretty hat if I do say so myself.

Tuesday we were in Belize, not my favorite place in the end.  First of all you have to get on a small boat to get to the port, and I didn’t like that part at all.  The port itself was not much to write home about.  It was a bit scary, and venturing out beyond the port didn’t happen.  That night though, the turbulence started . . .
Wednesday morning we were supposed to go to Isle Roatan.  Because of the weather we couldn’t make it to the port, despite several attempts by the captain to pull in.  We ended up spending the day again at sea!  OH, and the ship kept on rocking because of 100 mile per hour winds..
Thursday we were supposed go to Costa Maya, but instead we headed back to Cozumel.  Same port, but this time, rainy and cold weather.  Well, it was January.  It was  odd being in Mexico with this cold, wet weather, not what I anticipated for this cruise.
Friday was another day at sea, I decided to do some more reading, yes, I spent time reading on a cruise.  I actually finished a book for my book club and started a new book.  I also took naps, it just seemed the thing to do, since I was pretty relaxed I couldn’t help but catch a few extra Zs.  We went dancing a few nights as well.  It was a small club, but I had a grand time shaking my booty on the dance floor to the loud music.  On board entertainment was readily available.  We caught one showcasing songs from various decades with dancing and singing that was pretty entertaining.  Since there is also shopping on the ship, I did a little exploring of the shops and I got beautiful earnings and a necklace for myself.  What is great about a cruise is you make it your own.  If you want to take excursions and explore the ports that is up to you, if you don’t want to venture out you don’t have to.  Plenty of people spend much of the cruise aboard the ship only.  You make the cruise what you want it to be.
I did also finally get to perform at Superstar Live Karaoke.  Our family friends were cheering me on as I sang Man, I Feel Like a Woman by Shania Twain.  It was incredible singing with a live band, super scary, but so exciting too.  I was so nervous up there, even with two rum and cokes in me, I kept feeling my mouth get dry and sticky. 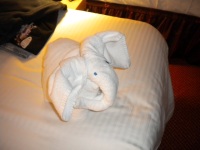 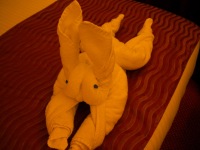 Another thing that was special on this trip,  were the towel animals left in the room.  I don’t know what it was, but I got a kick out of the different animals on the bed every night.  I even took the towel animal making class they offered on the last day, and bought a book on how to make them.
Finally, on Saturday morning we had to get off the ship, very early I might add, and headed home.  It ended up being an interesting experience, and I did relax as much as I could with the bad weather and swaying ship.  When everyone asked if I would go on a cruise again, I said I guess I can be forced persuaded to go again .  I admit I did go on a cruise again just this past January, much to my astonishment, it wasn’t half bad ;0)
K

Dating Dilemmas of the Damned . . . or Don’t Call Me, I’ll Call You

Having been away from the dating game for a long time, yes indeed over a year and a half, with much trepidation I dipped my toe back into the pool.  And the pool has proven to be more than treacherous.  I decided to go back to an online dating site, which in and of itself wasn’t that huge, it is weeding through the responders that is proving to be my undoing.  I took a chance, and meet a guy from online recently.  Coffee seemed safe and simple enough, and I made the plans on my turf.   Things seemed to go okay, but then things took an aggravating turn, much to my chagrin.  This guy decided that my pace and timidity did not suit him, which in the end proved to be a blessing, but still got me into quite the royal snit-fest.  Who was he to say that, who was he to give me the brush off, after all I wasn’t the one who had been quite so forward!  Alas, it was not meant to be, and I am grateful to have seen the huge red flags before getting too deeply involved.  It is just sad and unfortunate that I deal with that kind of behavior while trying out dating again, although I guess starting out badly should give some hope that things can possibly improve, but the hope I hold is with slipping fingers.  Finding someone, someone decent to share some time with, should be simple enough, and not a fear inducing chore it is more and more becoming.  It is evident that the task at hand is not so simple, and clearly not so fun, and the dilemma of keeping at it or not is just beginning.

..and the occasional iced caramel latte.

Life through the eyes of a female with Aspergers

Thought Catalog is a digital youth culture magazine dedicated to your stories and ideas.

Pop cartoons and artwork to inspire and entertain

It was all fun and games, until the fisticuffs and shenanigans... -Deutschmarc

Climb to the Stars

Interesting stuff from around my Life.

Lori Schafer's Short Subjects I Feel Like Writing About

We are All Miss America

4 out of 5 dentists recommend this WordPress.com site

I Remember You Well

Things were happening... and I remember there was music playing.

9-5+ working single mom. Occasionally accidentally funny. I've raised my fair share of hell over the years. Now I get to parent my own little hell raiser.